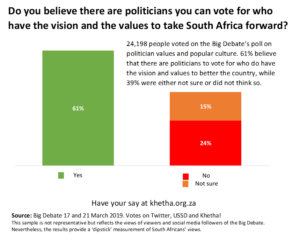 Episode Two of the Big Debate, now in its tenth season, focused on values and popular
culture in the run-up to South Africa’s national elections in May. An electronic poll before
and during the television broadcast indicated that many South Africans continue to believe
in the existence of politicians who have the vision and values to move the country forward.

The live studio audience engaged with pertinent questions around party policies, campaign
strategies and the lifestyle choices of political leaders. Among the issues raised were the use
of so-called ‘slay queens’ during electioneering, the dearth of sexual harassment policies
within political parties, and the gulf between the extravagant lifestyles of politicians and the
entrenched poverty of the masses of citizens they are meant to serve. The conundrum of
parliamentarians who wear luxury brands while their party espouses wearing uniforms in
parliament in supposed solidarity with workers was aired in this context. The lack of action
against members of political parties who have issued rape threats and participated in
violent attacks against journalists and other public figures was also discussed.

More than 24,198 viewers of the Big Debate, and followers of the show on various social
media platforms, participated in the poll on whether there are politicians they can vote for
in the 2019 elections who have the vision and the values to take South Africa forward. In
addition to Facebook and Twitter, participants could vote via a free USSD SMS service and
the Khetha! App (www.khetha.org.za) which engages young people in conversations on
current issues. Thus, the poll was accessible to a large national sample, across demographic
and class lines. The show’s primary audience is young, black, urban and more politically
engaged than the general population.

While the massive corruption scandals of recent years, as well as the prevalent negative
perceptions aired on the show and on social media platforms suggested a prevalent
negative attitude toward politicians, with many complaining that politicians fail to set a
positive moral example on key social issues, the poll results suggest a more optimistic
picture. The majority (61%) of poll respondents do have faith that the country’s current
politicians have the vision and values to take South Africa forward, with just over a quarter
of respondents taking the opposite, negative, view, and about 15% indicating that they
remain unsure on this issue. While only 45% of Twitter users said yes, 69% of those who
voted via the free USSD line and 67% of those who used the Khetha! app had a positive
response.

The Big Debate poll was conducted by Grassroots, Social Surveys Institute and OpenUp.
Khetha! is supported by Open Society Foundation and Media Development and Diversity
Agency.