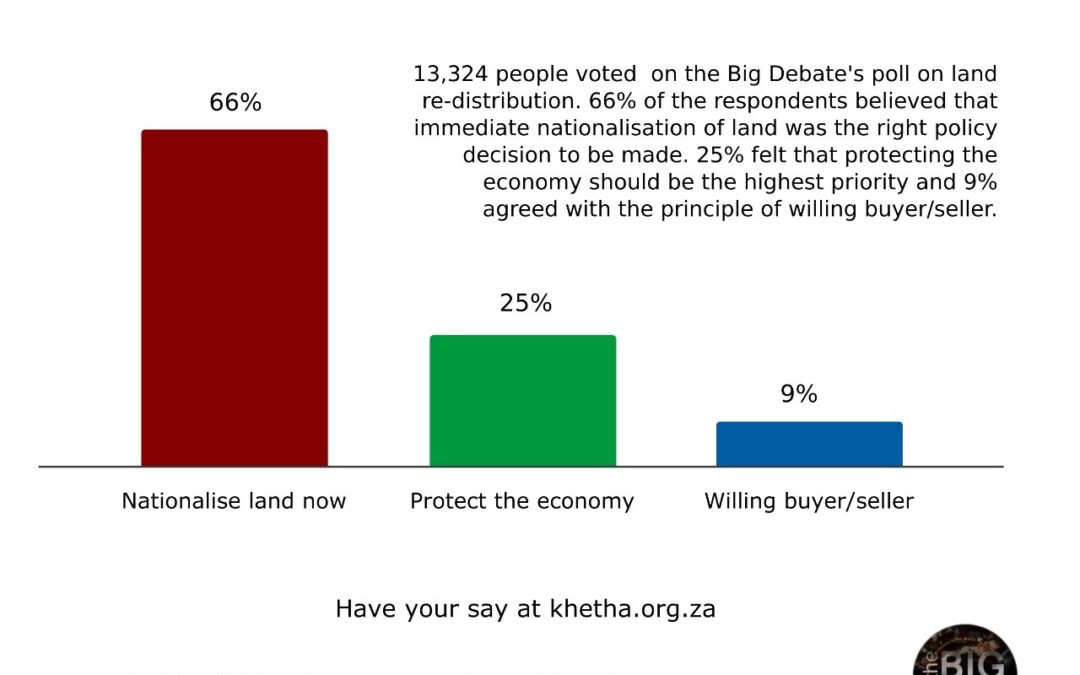 Emotions ran high during Sunday’s Season 10 premiere of the Big Debate, with heated
discussion around the topic of land reform in South Africa. An electronic poll before and
during the live studio broadcast showcased a strong preference for the nationalisation of
land.

For the first time, viewers of the Big Debate, and followers of the show on various social
media platforms, could vote on what is set to be a key issue for the upcoming national
elections. In addition to Facebook and Twitter, participants could vote via a free USSD sms
service and the Khetha! App (www.khetha.org.za) which engages young people in
conversations on current issues. While not nationally representative, the poll is indicative of
views by a large national audience, across demographic and class lines.

Results from the 13,324 voters showed a decided inclination towards nationalised
expropriation, the favoured option of the EFF, while the ANC and DA policy positions
(respectively summarised as ‘protect the economy’ and ‘willing buyer willing seller’)
received considerably less support.

61% of respondents feel that land expropriation without compensation is good for South
Africa, whereas 23% said no and 16% believe that it’s not that simple. On the question of
which land reform path to take, a massive two thirds (66%) of those polled want land to be
nationalised immediately, while just over a quarter (25%) believe it should be done
carefully, without harming the economy. Less than one in ten (9%) support the willing buyer
willing seller model.

The two hour duration of the show was scarcely enough to underline the complex, multi-
layered and divisive nature of the land debate. In the words of Prof Ruth Hall from the
University of the Western Cape, the debate clearly demonstrates that “there is not one land
question in South Africa … people see different elements of it…. Our existing land
dispensation is illegitimate in the eyes of most South Africans.”

The Big Debate poll was conducted by Grassroot, Social Surveys Institute and OpenUp.