NO LIGHT AHEAD FOR SA’s COMPLEX ENERGY CRISIS 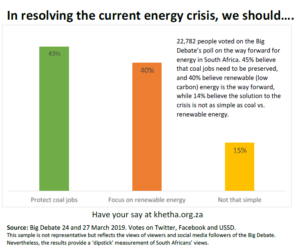 Season 10 of the Big Debate heated up this week, its focus on the country’s energy woes
appropriate following weeks of rolling blackouts that have left citizens irate and anxious.
The audience during the live television broadcast included representatives of mineworkers
and unions, as well as activists and citizens.

The feasibility of renewable cleaner energy alternatives was explored, while noting that
climate change presents potential challenges in this regard, given the recent cyclone Idai in
Mozambique and recurring drought patterns across southern Africa.

Resistance against a move away from fossil fuels largely emanates from projected job losses
in the mining sector, especially coal, which would run into hundreds of thousands, a heavy
burden in an economy already beset by high unemployment levels.

It was noted that energy parastatal Eskom’s debt has reached half a trillion rand – equivalent
to more than the country’s combined education and health budgets! Eskom has also been
mired in corruption scandals; and World Bank Presidential nominee David Malpass indicated
that World Bank loans have been “riddled with corruption”, with South Africa being a case
in point.

Even amongst workers’ unions, there is an acknowledgement that a move towards more
sustainable alternatives is desirable and inevitable, but they demand that “the transition has
to be just”. However, there is little consensus as yet on what a “just” transition should
incorporate.

Johnrie Gule, a worker at Tegeta mine, claimed that mineworkers have not been paid in five
months and that trains loaded with coal mysteriously went “missing”. Tracey Davis from Just
Share called for greater social ownership, noting that key decisions are being made by those
in the government, fossil fuel and financial sectors – who are all focussed on short-term
benefits for themselves.

An electronic poll before and during the show indicated that respondents (22,782) were
divided on the question of an appropriate way forward, with 45% voting to protect coal jobs
and another 40% supporting a focus on renewable energy and the remaining 15% saying the
issue is not that simple. Votes captured on social media revealed a stronger push towards
renewable energy alternatives, with 72% of Facebook voters and 58% of Twitter users
favouring this option. By contrast, of those who participated via a free USSD service, 56%
were in favour of protecting coal jobs.

An audience member enquired when the energy problems would be resolved. In response
Eskom board member Nelisiwe Magubane promised there would be no load shedding in the
coming week, but that there would undoubtedly be intermittent load shedding in the next
few months. It appears that South Africans will continue to grapple with the consequences
of poor energy management for some time to come.

The Big Debate poll was conducted by Grassroots, Social Surveys Institute and OpenUp.
Khetha! is funded by Open Society Foundation and Media Development and Diversity
Agency.