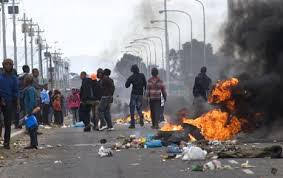 In 2016-2017, Social Surveys Africa conducted a study with Freedom House South Africa in 10 communities across South Africa which had experienced various forms of collective violence and protest in recent years. 4000 residents of these communities (400 randomly sampled residents per community) were surveyed. This note summarises three kinds of important insights from this study: the conceptualisation of social cohesion, the understanding of factors associated with protests and looting, and methodological considerations in the study and monitoring of these factors.

Conceptually, social cohesion is often explicitly or implicitly understood to be a state of being without protest or violence. Protest, looting, and looting within the context of protests are assumed to be the same kind of social artefact, all of which is antithetical to social cohesion. What our findings suggest, however, is that protesting is part of a continuum of activities that are about collective responses to solving collective problems, i.e. the core of social cohesion. We can see that it is part of this continuum because the same individuals participate in this spectrum of activities, motivated by values and worldviews that support collective problem-solving. Looting, in contrast, is outside this spectrum. The people who consider looting as an option are motivated by different values and worldviews than those which inform protestors and they do not participate in the other types of collective problem-solving available in a community. The implication is that debates on social cohesion, efforts to measure it and interventions to ‘strengthen’ it should integrate certain kinds of protest as an indicator of the presence, not the lack, of social cohesion, working with the people who participate in protests as prime champions of social cohesion in their communities. Looting and looters, on the other hand, are warning signs for a lack of social cohesion.

In addition to the insight that attending a protest or march and intending to loot a shop are distinct activities – motivated by different factors and carried out by different groups of people – our study identifies key distinguishing characteristics for each group of actors. The difference lies less in the demographics or external conditions of the actors, although protestors tend to be more materially deprived than potential looters, and is more a difference of attitude, worldview and social practice. It is therefore fundamentally a choice rather than an automatic reaction to a set of externally defined material circumstances. This is not to say that material circumstances at the individual, household or community level are irrelevant. Indeed, our finding that food insecurity and lack of healthcare access are stronger predictors of protest than water or electricity access should inform a change in intervention focus, and continued attention to informal housing as a protest motivator remains important. Further, the communities included in this study all share high levels of poverty and so our findings cannot be used to distinguish between poorer and more well-off communities – only between actors within poor communities. Among people who are materially poor, however, this study shows that individuals’ reactions to their material circumstances are always mediated by their worldviews and their social choices.

We found four important dimensions according to which protestors and potential looters distinguished themselves: collectivist/individualist worldview; level of perceived relative deprivation; level of investment/integration into the community through social engagement and participation; and trust in inclusive or exclusive institutions. Protestors are more likely to be collectively oriented; see themselves as no better or worse off than others (even though they are often objectively worse off) nor as deserving better than others; are socially integrated in that they volunteer their time and give money to those in need, and participate in a wide range of social groups as well as community-based conflict resolution forums; and are more likely to trust inclusively-mandated institutions such as the courts and elected leaders to resolve disputes.

Potential looters, on the other hand, are individualistic to the point of narcissism; perceive themselves to be worse-off and deserving better, with higher levels of frustrated expectations; are socially isolated in that they do not participate in ubuntu-like reciprocal help or in social or institutional forums; and are more likely to trust particularistic actors such as traditional and political party leaders or civil society organisations (suggesting that in the contexts we are dealing with, such organisations also tend to be particularistic rather than inclusive) to resolve disputes.

Several methodological lessons flow from these findings. Firstly, the presence of protest should not be used as a proxy for the absence of social cohesion. Second, when documenting protests, efforts should be made to collect information which seeks to distinguish collective mobilisation from individualised looting or property damage. Third, it is important to augment community-level analyses of social cohesion, which tend to focus on levels of infrastructure or the presence of functioning institutions, with an individual level of analysis, e.g. collecting and analysing data from and about individual characteristics, perceptions and actions. Fourth, within the individual level of analysis, it is important to define and collect indicators relating to self-concept, worldview and mental health, in addition to the more commonly considered variables relating to material wellbeing and social/institutional participation. We also need to find better ways of measuring levels of frustrated expectations. Finally, in the measurement of material factors, both at individual and community level, it is more important to measure relative deprivation than absolute deprivation, both in terms of objective and perceived inequality.