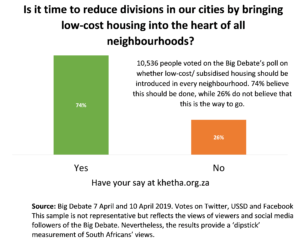 Followers of the Big Debate support the inclusion of low cost housing in all urban neighbourhoods, according to a poll undertaken before and during this week’s episode. Almost three quarters of respondents answered yes to the question “Is it time to reduce divisions in our cities by bringing low-cost housing into the heart of all neighbourhoods?”, while only 26% opposed the idea.

Apartheid spatial planning persists in South African cities, twenty five years after the advent of democracy. The Sustainability Institute’s Mark Swilling acknowledged that the post-1994 government built four million houses, but most of these have perpetuated apartheid patterns. Because markets determine higher property values closer to jobs and infrastructure, the poor are relegated to the outskirts where land is cheaper, but transport and other costs are higher. It was also noted that the transport modes used by the majority of the population received no subsidies, while the Gautrain and bus systems were subsidised.

There was consensus among panellists and audience members that public land is available in good neighbourhoods, but there is no political will to ensure that poorer members of society can access quality housing. Concerns over the depreciation of house values are the key obstacle to the incorporation of low-cost housing into wealthier enclaves within South African cities. Swilling emphasised the need to “intervene in the property market in ways that will upset financial institutions, the construction industry and others who benefit from how the urban property market works. There are precedents all over the world for how this can be done – we just haven’t had the courage to do it.”

The lack of scrutiny over financial legislation that guides government decision-making was also criticised. Geoffrey Bickford, of the South African Cities Network, noted that as cities face greater financial pressures, rates (and electricity and water tariffs) are increased based on property values. “The incentive then is to never accommodate the poor in areas with high property rates – causing cities to act in a certain way.”

Eco Village in Cape Town was discussed as an urban development model of inclusionary high-density housing that incorporates a sense of community and purpose, which is not dependent on the municipality sewage system or electricity grid. Nomzamo Zondo from SERI (Socio-Economic Rights Institute) declared that “if we are to address the housing backlog, the work cannot be handed over to private developers.”

While the law protects private land ownership, it is incontrovertible that so-called ‘land invasions’ have changed the ballgame through de facto redistribution of large tracts of urban and peri-urban land. Musa Gwebani, from Khayelitsha’s Social Justice Coalition, underlined the need to change language use around land invasions, pointing out that colonial land laws were as inherently criminal as current invasions are portrayed. “Instead of criminalising informality and land invasions, start embedding it within local government goals,” she advocated.

Participants also called for a change in how we talk about development and development planning, questioning why the rich live in ‘suburbs’, while the poor live in ‘housing’ and why ‘informal settlements’ are regarded as temporary, even when they have existed for decades. Johannesburg mayor Herman Mashaba’s comments about foreign nationals in the inner city were denounced as fuelling xenophobia by Gwebani and others.

Discussion turned to the recent Alex Shut Down protests – predicated on lack of service delivery as well as dissatisfaction over housing allocations. People who have registered do not appear on the database while others who have been allocated houses don’t live in them. Protest organisers have called for the upcoming elections to be delayed until the Zondo Commission has concluded and corrupt leaders are held accountable.

The rich and nuanced debate underlined the need for leaders and society to creatively re-envisage urban planning and land usage policies, sooner rather than later.

This press release was produced by the Social Surveys Institute in partnership with the Big Debate, with support from the Open Society Foundation of South Africa.

The Big Debate poll was conducted by Grassroots, Social Surveys Institute and OpenUp. Khetha! is funded by Open Society Foundation.

Big Debate is broadcast on SABC2 and SABC News Channel 404 with financial support from Luminate, Open Society Foundation and Ford Foundation. This week’s episode is online at www.bigdebate.live/watch